Like most couples, they cited irreconcilable differences in their divorce petition.  But their partnership might have been doomed from the start.

The two celebrities came from radically different backgrounds.  This may have contributed to the reasons for divorce.  Perry grew up in a faithfully Christian home.  Her parents ran a ministry, and they mandated that Katy attend Christian schools and camps, and even forbade her from listening to “secular” music.  Listening to gospel music and singing in the church propelled her interest in music.  Perry is squeaky clean too, reportedly never having been in any trouble. 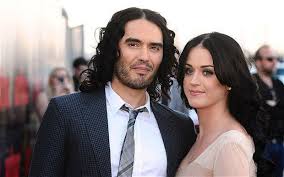 Brand had a more tumultuous upbringing.  His parents didn’t live together when he was a child, and in his teens, he lived with relatives as his mother battled cancer several times.  He only saw his father occasionally, and under strange circumstances.  Brand reports that his father would sometimes pick him up in fancy cars and take him on lavish vacations, even once travelling to Southeast Asia to patronize prostitutes, and then on other occasions his father would be broke and have to move in with Brand’s grandmother. Eventually, Brand discovered a love for comedy, stating that comedy forms a barrier between him and the unbearable pain of being alive.  In tandem with his growing success in comedy, Brand developed a heroin habit, but was able to kick it in 2002.  He is known for his volatility as well.  The firebrand has been arrested 12 times, including once in March 2012 for throwing a paparazzi’s cell phone through the office window of a law firm.

In a recent interview about the Katy Perry and Russell Brand divorce, a reporter asked whether Brand’s partner needs to share his philosophical and spiritual beliefs.  Brand did not answer the question directly, but stated that he thinks it makes sense for two people with athletic interests to be together, or for two people who practice Eastern Mysticism to be together.  He continued that it would be difficult for a meth addict and a professional tennis player to maintain a relationship.  Could Brand be implying that he and Perry divorced because of their spiritual and lifestyle differences?  Brand practices transcendentalism and incorporates elements of Eastern spiritualism into his life.  If Perry still maintains a rigorous Christian faith, these two distinct mindsets could orient their decisions in conflicting ways.  One of them could be more rigid and dogmatic in his or her spiritual rudiments, and this fundamentalism might prevent compromise, whereas the partner might have formed his or her opinion from a more flexible perspective.  A deep contrast in fundamental decision making could doom an otherwise strong marriage.

Brand’s nontraditional upbringing and former drug addiction could also signal a fundamentally different perspective that would be hard for some people to manage in a relationship.  These events could show that Brand is open to unpopular ideas and novel ways to solve problems, much more so than someone like Perry who was raised in a home that strictly controlled the type of music they listened to.