Facebook is used for all kinds of social purposes.  And now a new one: Facebook Divorce Papers served. 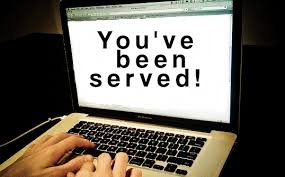 Divorce Resources for Women
As originally reported by the New York Daily News and later picked up by many media sites including The Huffington Post and Time, a judge granted the decision in Baidoo v. Blood-Dzraku (N.Y. Mar. 27, 2015). Certainly an odd twist, but in hindsight it makes a lot of sense. An excerpt:

As recently as ten years ago, it was considered a cutting edge development in civil practice for a court to allow the service of a summons by email. Since then, email has all but replaced ordinary mail as a means of written communication. And while the legislature has yet to make email a statutorily authorized method for the service of process, courts are now routinely permitting it as a form of alternative service…. [I]t would appear that the next frontier in the developing law of the service of process over the internet is the use of social media sites as forums through which a summons can be delivered….

The standard method — or perhaps better stated, the method of first resort — for serving the summons in a divorce action is personal delivery to a defendant. This reflects the great emphasis that this state places on insuring that a person who is being sued for divorce — a proceeding that can have immeasurable financial and familial consequences — be made aware of and afforded the opportunity to appear in the action. The problem with personal service, of course, is that it in order for it to be accomplished, a plaintiff must be able to locate the defendant. Even where a defendant’s whereabouts are known, there are times when it is logistically difficult, if not impossible, for a process server to gain the close proximity necessary for personal delivery.

Fortunately, the Domestic Relations Law provides a remedy for a person who is seeking a divorce but faces the prospect of being unable to effect personal service. DRL § 232 permits plaintiffs to request permission to utilize one of the alternative methods allowed under the Civil Practice Law and Rules (CPLR) that does not require “in-hand” delivery to the defendant. One such method, often referred to as “substitute service,” involves delivering the summons to a person of “suitable age and discretion” at the defendant’s “actual place of business, dwelling or usual place of abode.” Another method, known as “nail and mail” service, requires affixing the summons to the door of a defendant’s “actual place of business, dwelling or usual place of abode,” and then, as with “substitute service,” mailing a copy to the defendant’s “last known address” or “actual place of business.” A third method is “publication service,” where the summons is printed in a newspaper designated by the court and which can be granted upon a showing that “service cannot be made by another prescribed method with due diligence.”

Additionally, pursuant to CPLR 308(5), a court, upon a plaintiff’s ex parte application, may direct the manner by which service is to be made. This allows a court to go beyond any of the specifically prescribed methods of service and devise a method that fits the particular circumstances of the case. An application for alternative service under CPLR 308(5) can be granted only upon a sufficient showing that personal service, “substitute service,” or “nail and mail” service would prove “impracticable.” Case law, in accordance with well-established constitutional principles, further imposes the requirement that the method devised by the court be one that is “reasonably calculated, under all the circumstances, to apprise [the defendant] of the pendency of the action.”

Not all courts agree that social media should be acceptable:

Consideration must also be given to the fact that the way plaintiff proposes to provide defendant with notice of the divorce represents a radical departure from the traditional notion of what constitutes service of process. Even decisions from as recently as 2012 and 2013 have referred to the use of Facebook messaging for the purpose of commencing a lawsuit as being a “novel concept” (PCCare247 Inc., 2013 WL 841037 [permitting it as a supplemental method of service] ) and “unorthodox to say the least” (Fortunato, 2012 WL 2086950 [rejecting it as a means of service] ).

This court, however, concludes that Facebook divorce papers served is appropriate in the case because all other forms of contact are impractical:

In the final analysis, constitutional principles, not the lack of judicial precedent or the novelty of Facebook service, will be ultimately determinative here. The central question is whether the method by which plaintiff seeks to serve defendant comports with the fundamentals of due process by being reasonably calculated to provide defendant with notice of the divorce. Or more simply posed: If the summons for divorce is sent to what plaintiff represents to be defendant’s Facebook account, is there a good chance he will receive it?

In order for the question to be answered in the affirmative, plaintiff must address a number of this court’s concerns. The first is that the Facebook account that plaintiff believes is defendant’s might not actually belong to him. As is well known, the Facebook profile somebody views online may very well belong to someone other than whom the profile purports it to be. This has led courts to observe that “anyone can make a Facebook profile using real, fake, or incomplete information, and thus there is no way for the Court to confirm whether the Facebook page belongs to the defendant to be served” (PCCare247, Inc., 2013 WL 841037, at *5 [quoting Fortunato, 2012 WL 2086950, at *2]). As a result, this court required plaintiff to submit a supplemental affidavit to verify that the Facebook account she references is indeed that of the defendant. Plaintiff submitted such an affidavit, to which she annexed copies of the exchanges that took place between her and defendant when she contacted him through his Facebook page, and in which she identified defendant as the subject of the photographs that appear on that page. While it is true that plaintiff’s statements are not absolute proof that the account belongs to defendant — it being conceivable that if plaintiff herself or someone at her behest created defendant’s page, she could fabricate exchanges and post photographs — plaintiff has nevertheless persuaded the court that the account in question does indeed belong to defendant.

The second concern is that if defendant is not diligent in logging on to his Facebook account, he runs the risk of not seeing the summons until the time to respond has passed. Here too, plaintiff’s affidavit has successfully addressed the issue. Her exchanges with defendant via Facebook show that he regularly logs on to his account. In addition, because plaintiff has a mobile phone number for defendant, both she and her attorney can speak to him or leave a voicemail message, or else send him a text message alerting him that a divorce action has been commenced and that he should check his account (WhosHere, Inc., 2014 WL 670817, at *4 [“Courts have taken into consideration whether defendant already possessed either knowledge of suit or that he may be the subject to a suit”] ).

The third concern is whether a backup means of service is required under the circumstances. Although, as was discussed, other court decisions have endorsed using Facebook as a means of service, they have done so only where Facebook was but one of the methods employed, not the only method. As the court stated in PCCare247, Inc., 2013 WL 841037, at*5, “[t]o be sure, if the [plaintiff] were proposing to serve defendants only by means of Facebook, as opposed to using Facebook as a supplemental means of service, a substantial question would arise whether that service comports with due process.” In that case, and as well as in WhosHere, Inc., the other federal court decision authorizing Facebook service, the court stressed that it was allowing the use of a social media site only in conjunction with notice being sent to the defendants by email. In Noel B., 2014 N.Y. Misc. LEXIS 4708, at *4, the only decision from a state court permitting service via Facebook, the petitioner was required to mail a copy of the child support summons and petition to the respondent’s “previously used last known address.”

Here, plaintiff does not have an email address for defendant and has no way of finding one. Nor does she have a street address for defendant that could constitute a viable “last known address;” defendant’s last known address dates back at least four years and the post office confirmed that defendant no longer resides there and he has left no forwarding address. Thus, plaintiff has a compelling reason to make Facebook the sole, rather than the supplemental, means of service, with the court satisfied that it is a method reasonably calculated to give defendant notice that he is being sued for divorce.

Before granting plaintiff leave to serve defendant via Facebook, a method of alternative service judicially-devised pursuant to CPLR 308(5), there is one remaining question that should be addressed: Why use Facebook as either the sole or the supplemental means of service in the first place when there is a statutorily prescribed method of service readily available? That method is service by publication, something that is specifically authorized under CPLR 315. After all, publication is not only expressly sanctioned by the CPLR, but it is a means of service of process that has been used in New York in one form or another since colonial times. Even today, it is probably the method of service most often permitted in divorce actions when the defendant cannot be served by other means.

The problem, however, with publication service is that it is almost guaranteed not to provide a defendant with notice of the action for divorce, or any other law suit for that matter. In divorce cases brought in New York County, plaintiffs are often granted permission to publish the summons in such newspapers as the New York Law Journal or the Irish Echo. If that were to be done here, the chances of defendant, who is neither a lawyer nor Irish, ever seeing the summons in print, either in those particular newspapers or in any other, are slim to none. The dangers of allowing somebody to be divorced and not know it are simply too great to allow notice to be given by publication, a form of service that, while neither novel or unorthodox, is essentially statutorily authorized non-service. This is especially so when, as here, there is a readily available means of service that stands a very good chance of letting defendant know that he is being sued.

Moreover, the court will not require publication in any newspaper even as a backup method to Facebook. Although a more widely circulated newspaper, like the New York Post or the Daily News, might reach more readers, the cost, which approaches $1,000 for running the notice for a week, is substantial, and the chances of it being by seen by defendant, buried in an obscure section of the paper and printed in small type, are still infinitesimal.

Under the circumstance presented here, service by Facebook, albeit novel and non-traditional, is the form of service that most comports with the constitutional standards of due process. Not only is it reasonably calculated to provide defendant with notice that he is being sued for divorce, but every indication is that it will achieve what should be the goal of every method of service: actually delivering the summons to him.